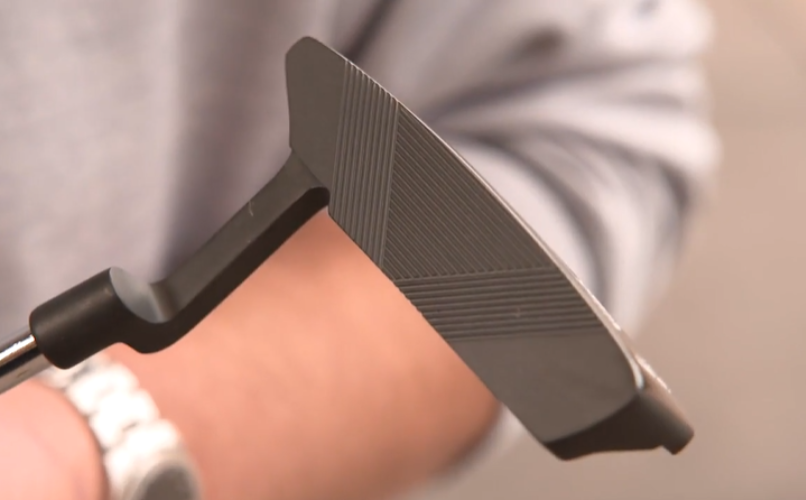 With the massive amount of putters on the market, it’s easy to get overwhelmed when trying to make a decision when it comes to choosing the putter that’s best for you.

Naturally, our opinion is slightly slanted, but to help you understand why we truly believe that the Pyramid Putter truly is your best option, we took a look at the top three putters on the market, compared it to the Pyramid Putter, and put together this transparent comparison guide.

Let’s break down how the Pyramid Putter stacks against the competition. By the end, I’m sure you’ll agree that the Pyramid is your best option.

Topics Covered in This Guide

Putters aren’t overly expensive, but they aren’t exactly cheap either. Let’s see what the other guys are priced at.

At Pyramid Golf, we want to provide the everyday golfer with premium equipment without charging a premium price. We do this by cutting out the middleman, going direct to manufacturer, and passing those savings along to you.

The Price of the Pyramid Putter sits at $164.00, which is 17% less than the cheapest leading option available. 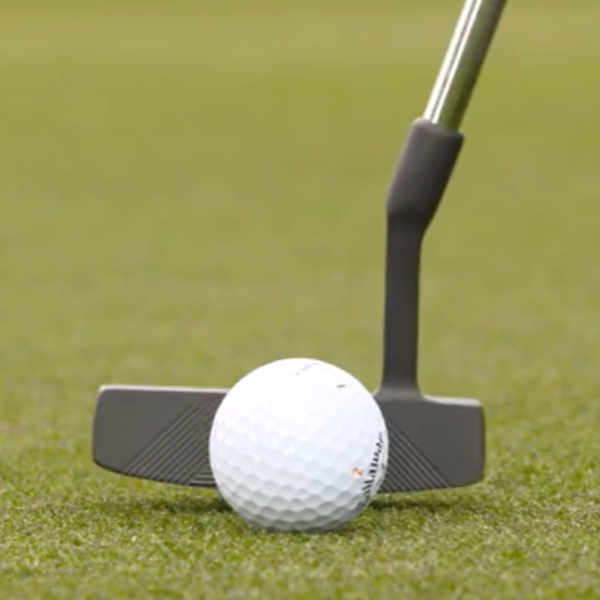 Generally, these types of putters are best for advanced golfers or “perfectionist putters” so they know that any missed putt is due to their technique.

But the Pyramid Putter is here to change that, creating unique triple-milled scoring lines so that any golfer can turn would-be pushes and pulls into on-line, in-the-hole putts.

More on that in a minute - let’s jump into the other guys first.

The Other Guys: Standard or No Milling

Out of the top three putters analyzed, two had run-of-the-mill horizontal milling lines that don’t do much for heel or toe shots.

The third option we viewed had no scoring lines whatsoever, which again does nothing for miss-hits.

The Pyramid Putter features three sets of precision-milled scoring lines to ensure putts roll smoothly and on-target – even if your stroke is off.

The sweet spot milling features pyramid-shaped, horizontal scoring lines that gives the ball topspin so there’s no skidding or bouncing as it tracks the hole.

The angled toe milling butts up to the sweet spot milling lines to get the ball back on track if you happen to strike the toe.

Finally, the angled heel milling that also butts up to the sweet spot milling turns pulled putts back on-line if you strike the heel. 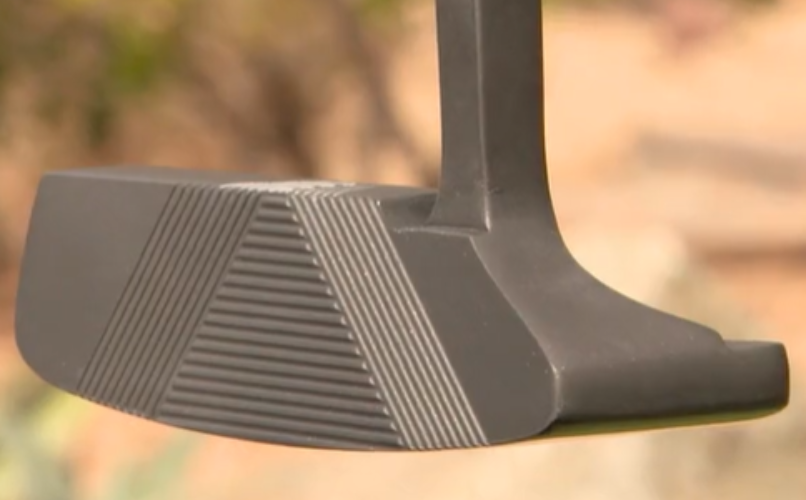 As any golfer knows, proper alignment is a crucial aspect of good putting; but seeing as 90% of golfers fail to line up correctly, consistently, on putts inside of ten feet, visual alignment guides are a must-have.

Even just a mere 2° error can cause a miss from five feet.

With that said, let’s look at how the other guys help you eye up your putts.

The Other Guys: Good, But Not Great

The three top competitors we took a look at have the visual alignment guide in the same spot that the Pyramid has, so there’s nothing to speak of there.

But the Pyramid does take it one step further...

On the Pyramid Putter’s top line, you’ll notice a series of grooves aligned to form a pyramid. These visual alignment grooves help you match the ball precisely with the sweet spot, enhancing your accuracy and distance control.

With your eyes over the ball, you can easily tell if it’s directly aligned with the sweet spot. 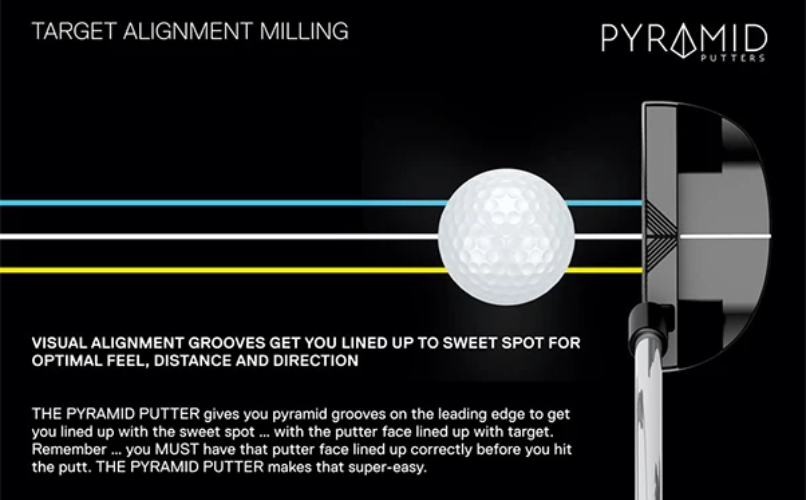 The grip of a putter can have a significant impact on your putts. When choosing a putter, you want a no-taper grip to promote consistent hand pressure and smooth stroke as well as features that promote an enhanced feel and limits hand and wrist movement.

Let’s keep that in mind as we look at what the other guys have to offer.

The Other Guys: Can’t Say Much

To be honest, the webpages for the top three recommended putters we researched didn’t have much to say at all about the grips.

The only thing we could find was that one of the grips was tapered, which as we highlighted above, is not something you want.

The no-taper grip of the Pyramid Putter is uniform in diameter from top to bottom, which keeps your grip pressure light and steady.

It also features small, silicone dots for enhanced feel and a larger-than-standard size that limits hand and wrist movement. This results in natural engagement of the arms and shoulders for a consistent, “pendulum-style” stroke. 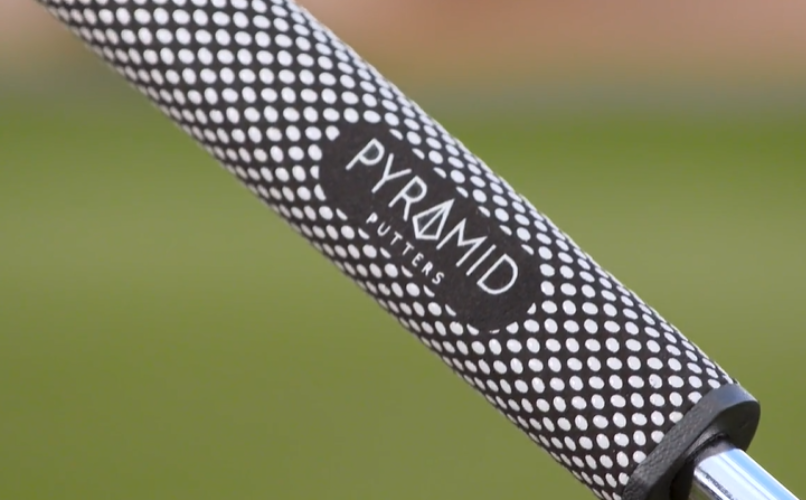 As you can see, we took what worked with standard putters, tossed aside what didn’t, and added our own unique advantages to bring you the best putter on the market.

Over 300 five-star reviews from satisfied customers would agree with that sentiment; but if you don’t after trying the Pyramid, send it back within 30 days for a no questions asked refund as part of our money-back guarantee.

Thanks for stopping by, shoot us an email at support@pyramidputters.com if you have any other questions.